Pushkar : The picturesque township and the sacred lake of Pushkar lie 11 km. From Ajmer. Pushkar is separated from Ajmer by the Nag Pahar (Snake Mountain). This beautiful lake surrounded by bathing ghats has its religious significance rooted in a myth. According to the Padma Purana, Lord Brahma was in search of a suitable place for a Vedic yajna (sacrifice). While contemplating, a lotus fell from his hand on the earth and water sprouted from three places. One of them was Pushkar, and Brahma decided to perform his yajna here.

A lively and gigantic fair is held every year on Kartik Poornima (full moon in October-November). About 1,00,000 pilgrims and ascetics from far and near gather here to take a dip in the holy lake.

The fair is also the biggest camel market. Besides camels, horses and bullocks are sold here. The people in their colourful attires enhance the cheerful mood of the fair. Pushkar abounds in temples and also has the temple of Lord Brahma the God Creation. This is the only temple dedicated to Brahma. 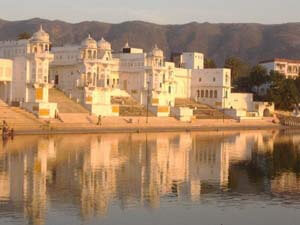 Pushkar Lake : An interesting drive, 11 km to the west, takes one through a mountain pass to the holy lake of Pushkar. One of the mountains on this pass is called Nag Pahar or snake mountain where the Panchkund and cave of Saint Agastya Rishi is located. It is said that Kalidasa, the 4th century Sanskrit poet and playright, placed the action of his masterpiece Abhijnama Shakuntalam in this forest hermitage. The lake has legendary origins. A lotus fell from the hand of Lord Brahma and dropped into this valley. A lake sprang up on the spot, and was dedicated to him. A temple of Brahma is a popular place of pilgrimage.

Pushkar is regarded as a holy place by the Hindus, since all the Gods & Goddesses of Hindu pantheon observed a 'Yajna' here. Moreover, the Pushkar Lake near this temple is believed to have been appeared when a Lotus flower fell from the hands of Lord Brahma in this valley. According to the Hindu mythology, once Lord Brahma was cursed that he would be not worshipped frequently by the people. Due to the reason, this is the only known temple in the world, where Lord Brahma is worshipped.

Constructed entirely in marble, the Temple can be easily identified with its tall red spire. The temple is accessible by a flight of marble steps. An image of 'Hans' (Goose) can be traced on the entrance of the main shrine. One can also spot the silver turtle, which is embossed on the floor in front of the sanctorum. In the vicinity of the turtle, many a silver coins are placed on the floor. Even, the inner walls of the temple are studded with silver coins.

The main shrine houses the life-size image of Lord Brahma with four hands and four faces, facing the four basic directions. An image of Goddess Gayatri, who is known as the milk Goddess, can be seen near the idol of Lord Brahma. The walls of the temple are adorned by beautiful images of Peacock and Goddess Saraswati. From the temple, there is a silver door that leads down to a small cave. This small cave comprises a temple of Lord Shiva.

During the time of Pushkar Fair, this temple is thronged by people in large numbers. At this point of time, Rajasthan Tourism arranges tents for the convenience of pilgrims and tourists. Brahma Temple gets a major attraction as it is the only temple in the world where Lord Brahma is worshipped. Pilgrims come to pay their homage and get blessings from the Lord. 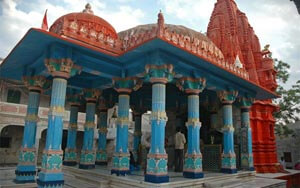 Brahma Temple : the only temple that is dedicated to Lord Brahma in India. Located near the Lake at Pushkar in Rajasthan, Brahma Temple receives many pilgrims to its doorsteps every year. Built in the 14th century, Brahma Temple commemorates Lord Brahma, who is considered as the creator of this Universe according to the Hinduism. Lord Brahma is one amongst the trinity of Hindu Gods, the other being Lord Shiva and Lord Vishnu. For the Hindus, Brahma Temple is an important pilgrim place. Raised on a high platform, the temple lies in the Pushkar valley that is known for its scenic beauty. 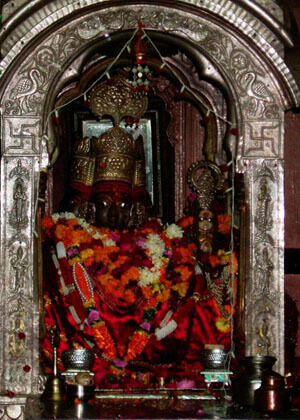 Location: Near Pushkar Lake in Pushkar, Rajasthan
Built in: 14th century
Dedicated to: Lord Brahma
Attraction: Sole temple in the world where Lord Brahma is worshipped
How to reach: One can easily reach Brahma Temple by taking regular Buses or by hiring taxis from anywhere in Rajasthan

We have more than 99 Tailor-made Tour